Join our subscribers list to get the latest news, updates and special offers directly in your inbox

Ifeanyi Ejiofor, lead counsel for the detained leader of the Indigenous People of Biafra, Nnamdi Kanu, has petitioned the British, and American embassies, and the United Nations office in Nigeria, requesting their delegates to come and observe court proceedings involving his client against the Federal Government.
Kanu’s criminal proceedings on the seven-count amended charge preferred against him by the Federal Government is billed to continue from 18-20 Jan at the Federal High Court, Abuja.

Ahead of the trial, Ejiofor requested the foreign observers’ presence in his petition titled, ‘Request For Delegate(s)/Representative(s) To Observe Court Proceedings In Re: Charge No. Fhc/Abj/Cr/383/2015, Federal Republic Of Nigeria V. Nnamdi Kanu.’

He called on the envoys to “observe the proceedings of the court on those adjourned dates and on any other date to which further proceedings in the cause may be adjourned until the matter is disposed of.”

In the letter dated 11 January 2022, the IPOB lawyer said their call was on the need to ensure a fair trial for Nnamdi Kanu.

Part of the petition read, “The instant request is compelling in the circumstance to ensure that the whole process of our client’s trial is fair and just in all circumstances.

“It must be remembered that his purported indictment on criminal charges has a political undercurrent.

“This fact impels all truly democratic institutions of the world, to keep a close, watchful and attentive eye on the whole judicial process that has intervened to determine his culpability.

“The Nigerian Government has a profound interest in the criminal charge pending against our client and the outcome of his trial. The said government overreached itself by ensuring that our client was brought back to Nigeria by every means possible. Some leading members of the government have also made certain unsavoury comments about our client.

“For this reason, we view as compelling the need to invite representatives of truly democratic institutions of the world to observe court proceedings in relation to his trial.

“Further, we view the recent extra-judicial comment made by the President of the Federal Republic of Nigeria in a media chat he had with two journalists about the pending trial of our client with circumspection.

To forestall any undesirable consequence that may eventuate on it, we consider it expedient that truly democratic institutions of the world send representatives to observe proceedings of the trial of our client.

“We firmly believe that the presence of those representatives in court would make all parties tow the path of honour and rectitude and assure the fair trial of our client.”

Ejiofor encouraged the envoys to forward the names of their representatives for him to notify the court of their expected presence in court on the adjourned dates.

The lawyer also appealed to the diplomatic nations to prevail on the Nigerian Government to caution her security agents. “They should exhibit a modicum of civility in their operations and must refrain from harassing, intimidating and or arresting innocent civilians who may throng the court premises on the 18th, 19th and 20th of January, 2022, in demonstration of their unwavering solidarity to our client,” he said.

“It is on record that these civilians who have remained devoted and steadfast in their commitment and solidarity have conducted themselves peacefully and in the most civil manner. It is also on record that, notwithstanding the fact that these civilians have always been peaceful in their conduct and show of solidarity, the security agents have continued to harass, intimidate and arrest them.

“Many of these persons arrested are still languishing in various detention facilities in Nigeria,” Ejiofor added. 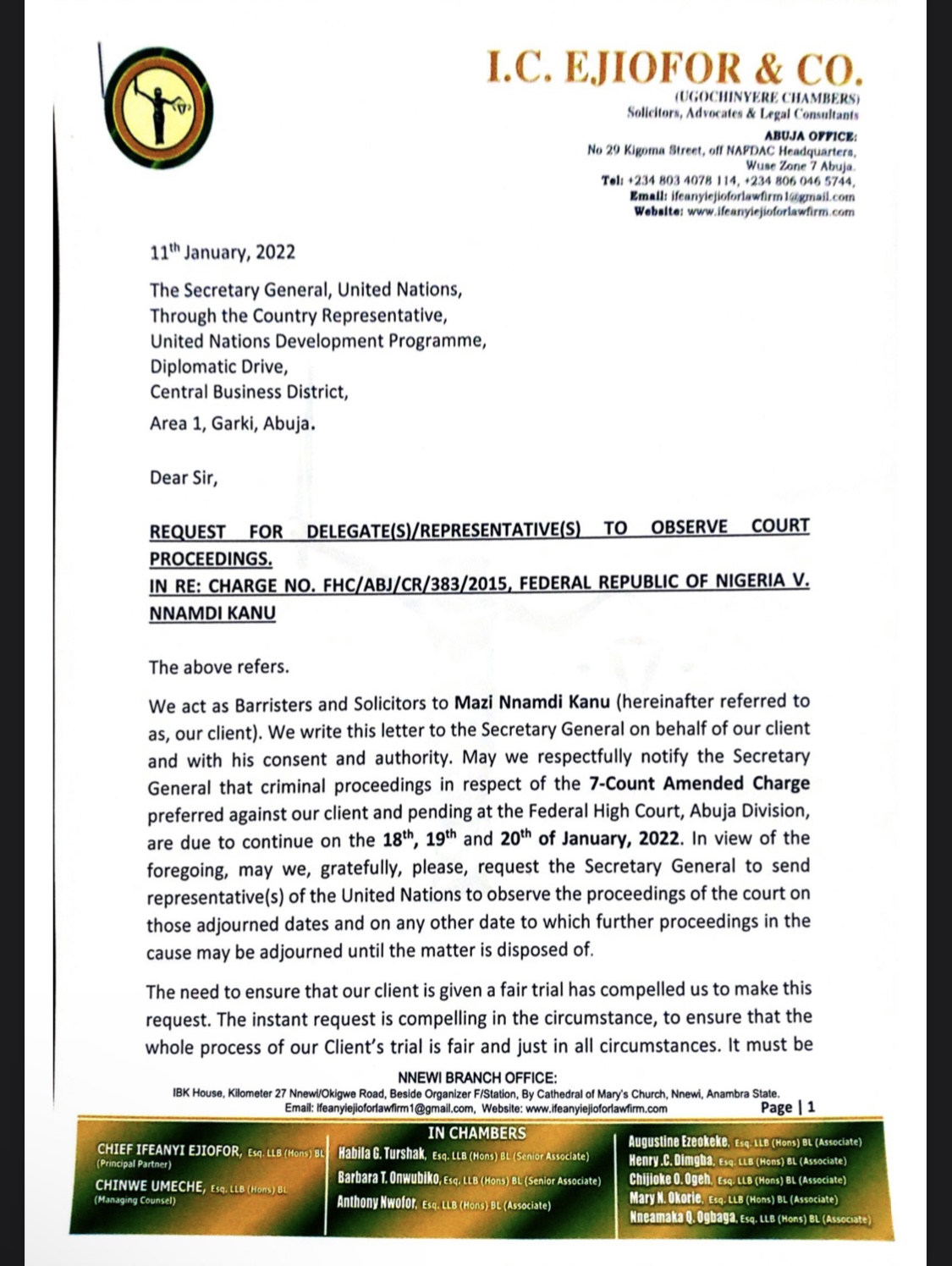 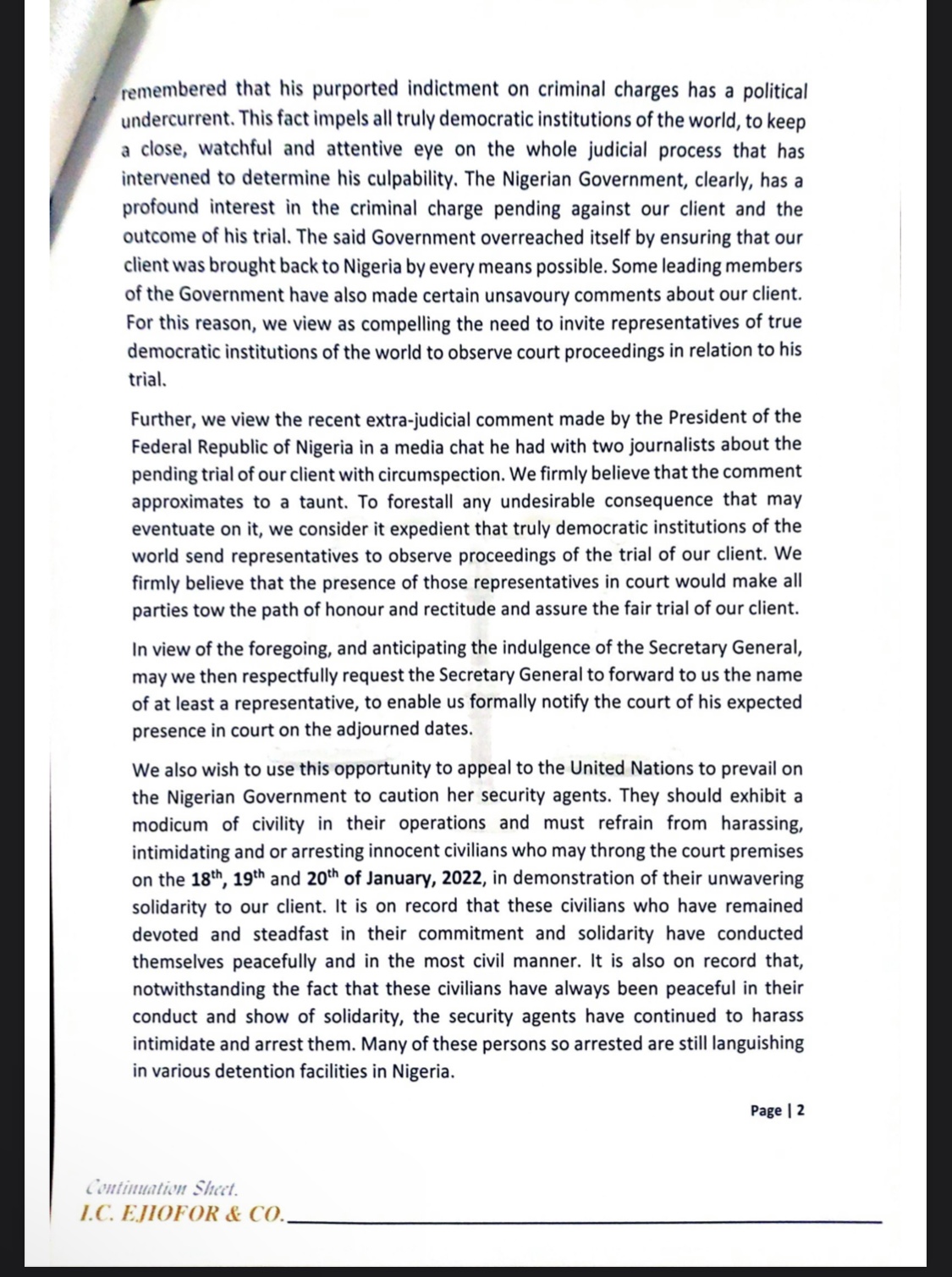 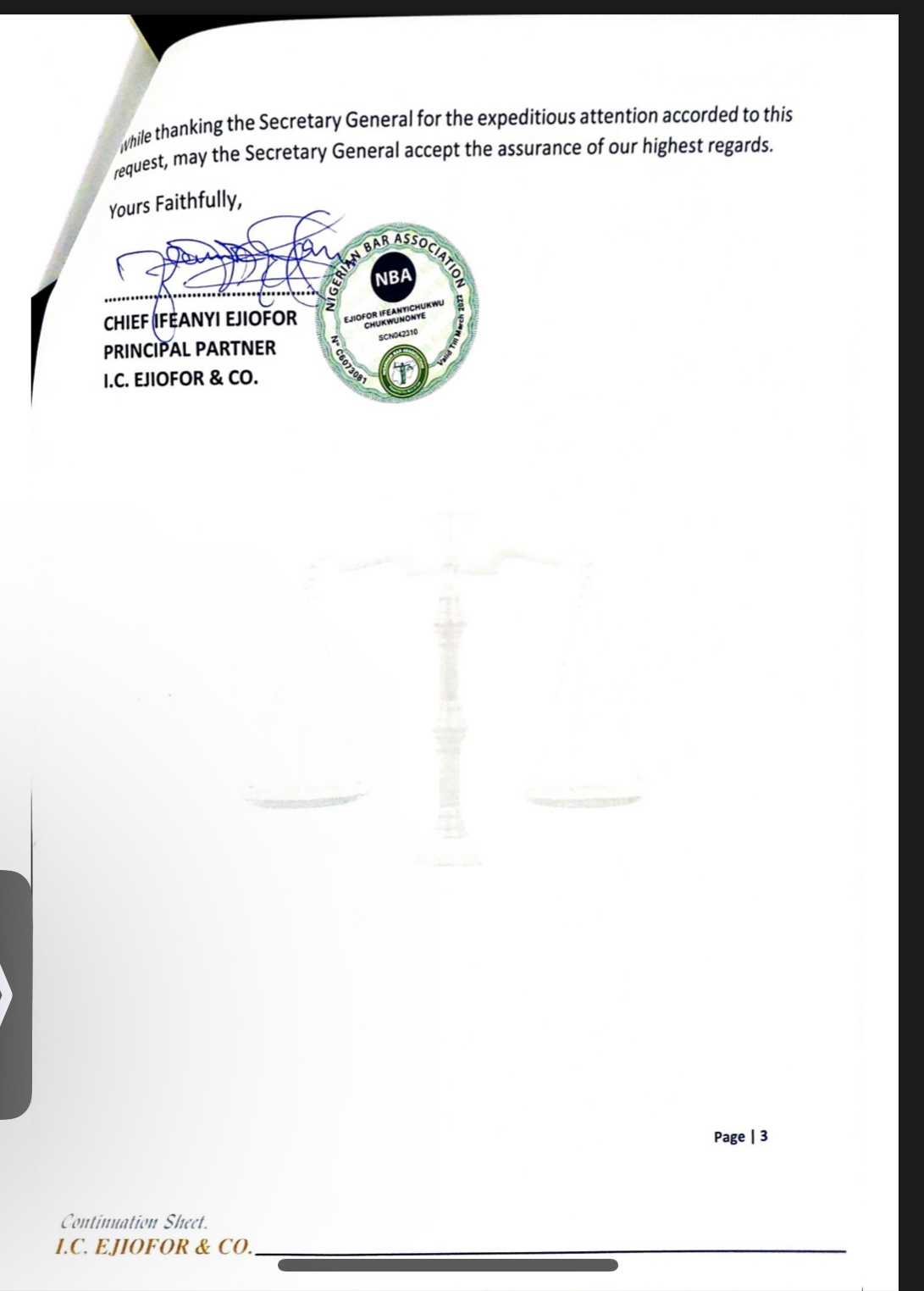 Our ruling on Imo governorship will haunt Nigeria for long...

Biden to raise number of guest worker visas, with more...

The policeman told the governor that he and his colleagues were at the estate on...

Anger sparked by a gas price increase in the resource-rich Central Asian nation...

As Anambra and Southeast citizens still bear the brunt of Fulani jihadists’ bush...

Our ruling on Imo governorship will haunt Nigeria for long...

More about the sacked Nigerian born Hon. Minister and Attorney...

‘We’re not looking to rip him off, but at the same time we’ve all got mortgages...

Naming Rites And Traditions Of The Igbo Cultures

Indeed, the critical importance of Media in an Election Period can not be overstated

DO YOU THINK BASED ON HUMAN PHILOSOPHY AND UN CHARTER, THAT SELF-DETERMINATION IS A CRIME?